Finally A Speed & Agility Training Program That Develops Faster Athletes When It REALLY Matters
...During Game-Time

A Sports Speed System That Actually Carries Over! How to get your athletes faster while transferring that speed over to their sport!

The vast majority of sport demands come from change of direction, deceleration and rapid re-acceleration. But most speed training programs just focus on linear speed.

Linear speed is a very small component of sports speed demands. If you look at American Football running during games, for example, 98% are chaotic and 2% are straight linear. With this said, how would you spend your training time with regards to getting your athletes faster and getting them ready to use that speed in the game?

It's important for us to recognize these demands and train our athletes accordingly.

Real world sports situations place extreme demands on an athlete’s ability to decelerate under control. These types of situations are impossible to replicate in closed drills that are in typical speed training sessions. Open drills are more applicable to sports.

Closed Drills are pre-determined drills. They can be linear or even change of direction drills where the athlete knows where to go and what's going to happen. Good for teaching mechanics but less of a transfer over to game situational speed.

Open Drills are unplanned change of direction drills based on verbal, visual or physical cues. They promote real life reaction. This is the foundation of CHAOS.

Chaotic qualities can be trained and improved and then added to. They are essential for sport speed development and an athlete’s ability to react to unpredictable external stimuli, just as they would encounter in their sports.

Speed development starts with closed, structured and predictable training drills. The next stage is to add the open drills - how speed in a sports environment actually happens. It's speed training for real sport situations.

Unpredictablity needs to be addressed in your training. It's more than just teaching a drill, it's speed that transfers over to game situations. It gets your athletes faster and ready to be faster and more explosive in any situation (not just in a controlled enviroment).

That's the beauty of CHAOS 2.0. It gets your athletes ready to express their speed during competition or whatever chaos their sport throws at them.

What Exactly Is CHAOS For Speed Development?

We have developed an acronym that can help in progression to CHAOS:

Teaching progression should be constantly “coached” (stopping, body position, optimal angles, plant foot, etc.) and the athlete should be aware of the learning process. Over time, the athlete will begin to feel that these chaotic patterns are merely a part of his/her sport performance and the actual ‘thinking’ of body position, etc. will in essence become a part of their subconscious (second nature).

The key to developing true sport-speed is the variable of unpredictability. Basic agility drills, while they can help develop body awareness and quickness specific to the individual drill, do not address the nature of sport and their decision-making demands.

A: Active to Reactive

Progression should start with set agility patterns and slowly progress to reactive movements. Consider the implications of learning how to STOP and how strength and technique play a major role in an athlete’s reactive ability.

This is the key to the CHAOS concept. Athletes are put “on the spot” and forced to not only move fast but also to now have to factor in reaction time due the processing of visual or auditory cues. Over time, due to their effectiveness, you will find that most of your drills will ultimately become more ‘open’ in nature.

You cannot just throw athletes into the fire and demand that they process and react to chaotic patterns with lightning fast speed. Start with more simple open drills and keep increasing the difficulty based on your athlete’s progress. You must walk before you can run!

About the Author: Robert dos Remedios 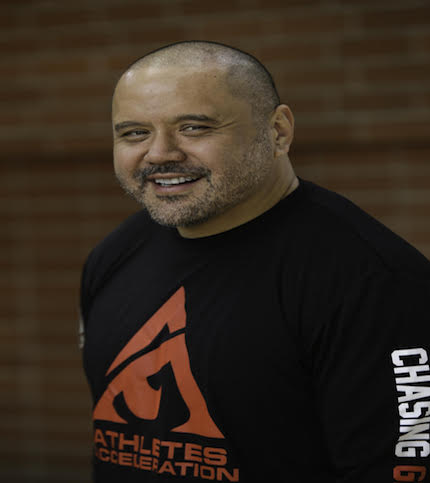 Coach Robert dos Remedios has been involved in strength and conditioning for over 30 years. After completing his competitive football career at the University of California, Berkeley in 1988, he began training athletes on a full-time basis.

“Coach Dos” has a Master’s Degree in Kinesiology from California State University, Northridge, has been a Certified Strength and Conditioning Specialist (CSCS) with the NSCA since 1990, and is one of only 100 “Master Strength & Conditioning Coaches” (MSCC) in the world as recognized by CSCCa.

Coach Dos served as Director of Speed, Strength & Conditioning at College of the Canyons in Santa Clarita, CA, a position he had held from 1998-2015 where he created a program that is emulated all over the world.

Lecture Video What is CHAOS Speed Training and how it works. The Scientific Research behind the CHAOS System. Then dives into how the CHAOS System works: Strength Training, Speed & Agility Development, Power, Conditioning, and Programming.

*Handouts, Outlines, Research, and PowerPoint Presentation are all included

This is the highly acclaimed concept that Coach Dos has delivered nationwide, and influenced conditioning programs worldwide.

The CHAOS System covers the drills, the research behind these explosive training methods, and proven progressions for introducing speed & agility training into your programs...that actually have a carryover affect to your sport!

Basically, CHAOS training entails the use of primarily “open” agility and quickness drills as opposed to the traditional “closed” drills. For those who are not familiar with open drills, we are talking about an athlete having to react, decelerate, and accelerate (in various movement patterns) when cued through an audible, a physical, or a visual stimulus.

Often times, coaches get a false sense of ability when assessing speed with the “traditional” drills (3 cone, pro agility, T-Test, etc.). These are highly trainable drills and outstanding performances can often be attributed to an athlete’s “mastering” of the movement pattern. So, an athlete that looks fast in these tests, isn't always the fastest on the field or court when it matters. I'm sure you've seen some athletes that are fast on the track but then can't seem to move on the field. Or vice-versa, an athlete that is slow in the 100m but when they are on the field or court, they look like the fastest athlete out there.

You need to train speed as it happens in sport. Training in “CHAOS” sums up what true speed and quickness is all about and has the highest sport specific speed carry-over. It shows true athleticism.

We always hear about the importance of being able to put on the brakes (decelerate). What about ones’ ability to put on the brakes when he or she doesn’t know WHEN they will have to decelerate? By training in this chaotic, reactive manner, we put the athlete as close to sport demands as possible.

With CHAOS Sports Speed we focused on drills that produced real-sport speed. Deceleration, absorption of load, reactive training, and power improvement are going to benefit any population of athlete across the board.

In addition to the obvious benefits to CHAOS, sport speed performance and power improvements, another key component and benefit from the program is injury prevention. The ACL should be a concern for ALL of us working with female athletes. Open drills are tremendous at placing greater stress on the ACL (this is a good thing) while teaching proper mechanics in this unpredictable atmosphere.

The CHAOS Speed System is going to be the best package for sports speed, work capacity building, injury prevention and overall building athleticism.

This is a must-have system for every coach and athlete that needs to improve speed!