by Athletes' Acceleration
in Speed Training, Training and Conditioning

The Simple Math Behind Running Faster

If you want to improve athletic performance you have to make your athletes faster. That's pretty straight forward.

So let's break the process down in very clear terms.

For the sake of argument, let us assume that an athletes' one rep max for deadlift directly relates to how fast they can run. (It doesn't, but for the sake of this argument, it will make things clear.) 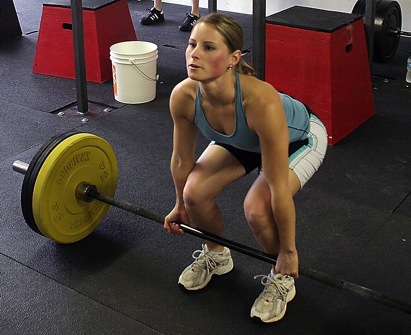 So, The Athlete has a max deadlift of 500 pounds. Therefore, if everything is done perfectly, The Athlete can apply 500 pounds of force to the ground with every step.

In a perfect world, if the athlete runs a race taking 50 steps, they will run their absolute 'best case scenario' time if they apply 500 pounds of force for all 50 steps.

But we know from working with young athletes that they things don't go perfectly with every stride. Or anything close to it.

So let's look at the first 5 steps of the race and see where things break down (keeping in mind that 500 pounds of force is a 'perfect' step/stride.

STEP 1. Athlete doesn't push into the ground/blocks hard enough, so only applies 400 pounds of force.

If your heel touches the ground, you're running slow!

STEP 3: Knee angle opens up too much and foot strike takes place in front of Center of Mass, applying 350 pounds of force.

STEP 4: Too much backside mechanics, so Athlete can't recover swing leg quickly enough to drive foot down into the ground, applying 300 pounds of force

STEP 5: Athlete recovers from bad start, gets foot down under hips, pushes the ground back and away, applying 450 pounds of force.

Now plot this out over the course of the entire race/distance being run and think about how much potential 'speed' is wasted simply due to lack of efficiency or running skill.

In just 5 steps, The Athlete applies an average of 370 pounds of force per step, out of a possible 500. This means The Athlete has an efficiency rating of 74%.

Bottom Line: If the athlete had better running form, better understanding of *how* it should feel when running, better coaching feedback, etc., they would be more efficient with each step and, based on simple physics, would run faster.

So, you can make athletes (in any sport) faster just by making them more efficient. How?

2. Give technical feedback. If you, the coach, know what the athlete should be doing, you can help them clean up their form. But if you don't tell them what to do (and give them correct information) they're not going to figure it out on their own.

If you don't give them good technical feedback, they're just going to keep practicing bad running and it will keep getting worse.

Now, let's say you improve average efficiency of The Athlete (by using the above methods) from 74% to 84%. Average force applied per stride goes from 370 pounds to 420 pounds.

Again, simple physics tells us the Athlete MUST get faster.

So, if you want athletes to improve, you must make them more efficient.

Here's the next thing you need to focus on:

Let's say you improve The Athlete's absolute strength from 500 pounds to 600 pounds. But you *don't* make The Athlete any more efficient.

So they stay at 74% Efficiency, but based off of a greater ability to apply force to the ground. So the athlete now can apply 444 pounds of force per stride (74% of 600).

By improving maximum strength, but not touching Efficiency, The Athlete goes from 370 pounds of force per stride to 444.

That's a HUGE improvement in terms of athletic performance.

So two identical athletes with identical Efficiency Rates step on the starting line. But one can apply 600 lbs. of force and the other 500 lbs. The physically stronger (yet otherwise identical) Athlete wins the race Every Single Time!

The moral of the story? Get your athletes in the weight room if you want them to perform better!

Now, let's say you improve absolute strength from 500 to 600 pounds AND you improve average efficiency from 74% to 84%.

Again, think about it. The stronger, more efficient athlete applies more force to the ground (runs faster) at only 84% efficiency than an otherwise identical athlete with 100%
efficiency but significantly lower strength levels.

You can get ridiculous results with your athletes when you focus on improving strength *and* efficiency.

This is where the argument that speed can't be coached breaks down. Sure you can't turn kids into Usain Bolt. But they're generally so weak and inefficient (even the 'good' ones) that they can make 'night and day' improvements by becoming more well rounded athletes.

All you have to do is look at the numbers and put a plan into place that focuses on long term development of specific biomotor skills: speed, strength, mobility, coordination and endurance.

15 Comments for “The Simple Math Behind Running Faster”